Alien Worlds is a metaverse blockchain game in which players may play games and generate NFT tokens to earn money. Play-to-earn games are becoming increasingly popular since they allow players to be rewarded for their efforts. You may participate in several activities on Alien Worlds, including questing, mining NFTs, and combating other players. Read on to learn everything about the Alien Worlds metaverse.

What is The Metaverse?

For years, technologists have predicted a moment when our virtual lives will be as important as our real ones. In theory, we’d spend a lot of time communicating with our friends and colleagues in the digital universe. As a result, we’d spend money on costumes and stuff for our digital characters there as well.

Virtual reality functions as a computer platform for leading a second life online in what tech people like Mr. Zuckerberg refer to as the metaverse. Virtual reality involves wearing a headset that enthralls you in a three-dimensional world.

What is Alien Worlds Metaverse? 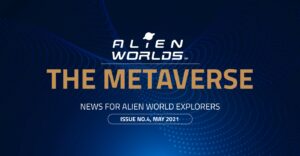 Alien Worlds metaverse is a DeFi metaverse where gamers may earn rewards by playing games. This network is currently powered by many blockchains, including Ethereum and the Binance Smart Chain (BSC). Members earn Trilium, the platform’s currency after they finish.

Users can exchange non-fungible tokens and native currency for money on this metaverse’s 7 planets.

Since its debut, Alien Worlds has managed to attract new players. The platform, which is still relatively young, currently has millions of users throughout the world, making it one of the most popular titles in the bitcoin sector.

NFT technology is used in Alien Worlds, as it is in other cryptocurrency games, to allow people to interact with distinct virtual items. To acquire access to some special capabilities, users may be forced to pay for non-fungible tokens. They can also sell received NFTs for cash.

Staking is another feature of the website that allows users to stake digital assets. Staking the native token, Trillium, allows individuals to partake in governance and decision-making. Staking, on the other hand, boosts the blockchain game’s liquidity by allowing players to earn incentives.

This software also employs cards, allowing users to develop their methods. According to the official site, people can participate in the game by purchasing NFTs tokens from Binance or WAX. These cards can be utilized in battles, missions, and mining.

The game has an interesting backstory that acts as a foundation for the gameplay. According to the official website, the game is about escaping Earth’s looming epidemic. The Federation, which comprises the majority of Bitcoin’s developed population, received signals from an extraterrestrial race, which led to the discovery. Along the trip, the gang encountered a wormhole and harvested Trillium. As the game proceeded, six planets were constructed on the Federation of Alien Worlds, with populations competing for resources.

Anything in the game is a token, like lands, minions, and weaponry. The most valuable NFT in this game is Land. You may mine items and get rewards when you possess an NFT land. Land NFTs symbolize parcels of land that may be mined or leased out in the video game. When you rent out items that you’ve mined, you get paid a commission.

Tools are tokenized things in the virtual world as well. You must first obtain the appropriate instruments to mine assets, which will make the process faster and easier. You must first pick a planet to mine digital assets. You must next select a land tract to purchase or lease from the landowner based on your options. It’s also reasonable to assume that new members start with spades and then upgrade their equipment. In addition, devices require a specific length of time to charge after each usage.

How To Play Alien Worlds?

To get started, you’ll need a WAX account. You may create an Alien Worlds profile and start playing the game after you have the profile. After there, you choose a name that will be displayed while playing. 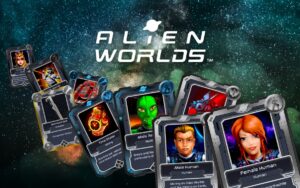 After you’ve created your account, the next step is to choose a planet. You can choose whatever planet you like, and you may change it at any time because it is a temporary place. The game transfers you to the mining hub when you select your plant, in which you will live for the next 10 years.

A mining hub is a site where mining activities take place. You can see your mining gear and land NFTs in the foreground. You ought to be able to locate a free shovel NFT in your arsenal because new users are given spades. Alien Worlds is essentially a mining game that requires you to mine for prizes. You may start mining by going to the mining center and selecting “mine.”

You’ll get some tokens and potentially an NFT after mining for a bit. It’s reasonable to conclude that lands differ, and as a result, some value digital material more than others. If you rent property to mine on, you must pay a portion of your earnings to the landlord.

We attempted to cover all of the main aspects of Alien Worlds. We hope you found the information on this page useful. Alien Worlds is a well-known cryptocurrency game that might help you earn some cash. But, as always, the market is unpredictable, so proceed with caution while investing.

On our METAGREATS page, you may learn about various metaverse games. With excellent market research, we will assist you in selecting the best crypto investment.