Axies are the protagonists of the video game Axie Infinity. They are used in battle in-game. This can happen in either Adventure Mode (PvE) or the Arena (PvP). They are a type of non-fungible token (NFT) that you own and keep in your wallet. You can collect them and use them to produce new Axies (offspring), a process is known as Breeding. They can be traded with other players or sold on a blockchain-based marketplace because they own them. In this article, we will learn all about Agamogenesis Axies. 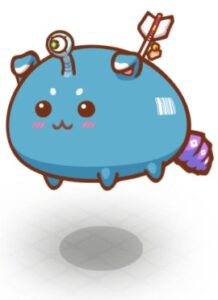 They are also your character in the Axie Infinity universe’s Lunacia during Land Gameplay. Players in this universe can own land, collect items, and earn resources. In turn, resources can be used to improve land and axes.

Players would also be able to be using their Axies in real-time battles against Chimera, alone or in groups. Chimera will drop a variety of resources, items, and blueprints that can be used to improve land and individual Axies.

According to legend, the MEO Corporation genetically modified and created the three Agamogenesis Axies. These Axies had Bionic Parts and were the first of their kind, the first Axie with that particular part. The Bionic Parts can be passed down to their children, with “almost” the same features as the child parts. They, like any other part, can evolve. Furthermore, these Axies have abnormal body colors unique to the Agamogensis.

On May 28th, 2018, the three Agamogenesis Axies were put up for auction. Coco Bear outbid the contest on all three with bids of 6Eth. The bidding ended on May 30th, 2018.

A few particular types’ of Axies are more valuable due to their scarcity. Origin, Mystic, Agamogenesis, MEO, MEO II, and Region Japan are the specific types.’

They also have distinct body colors and a body pattern that resembles a barcode.

The Agamogenesis Axies are as follows:

Each Axie has a distinct set of characteristics that distinguishes it and determines its value:

Let’s look at all of these traits and why they’re essential!

Axie Infinity has nine classes: Aquatic, Beast, Bird, Bug, Dawn, Dusk, Mech, Plant, and Reptile. An Axie’s class is essential for combat because each class has strengths and weaknesses against other classes. The Axie who has the class advantage will deal 15% more damage. A Bird class Axie, for example, deals 15% more damage to a Beast class Axie. With the class unfairness, the Axe will deal 15% less harm.

In Axie Infinity, there are three “secret” classes. Dawn, Dusk, and Mech are the three Secret classes. The Secret Classes are more difficult to breed because they require a specific combination of the two pure-bred Axies.

There is only a 33% chance of producing offspring with a Secret Class. Because they are more scarce, they are not inevitably more valuable. This is because they do not yet have someone else’s Class Cards (Body Part), but this may change in the future.

The body of an Axie is divided into six sections: eyes, ears, antlers, tongue, back, and tail. Except for the eyes and ears, each body part helps determine the card (ability) that the Axie could use in a fight. There is no card (ability) linked to the ears and eyes.

The following stats will be added to each card based on its type:

Furthermore, when an Axie of a specific class uses a badge from class, it gains a 10% attack and shield bonus. For instance, a Plant Axie who plays a plant card will earn 10% more attack/shield.

An Axie can have a variety of different patterns. Many people have had the same shape but decorative elements on their sides.

An Axie’s Breeding Count shows how many times an Axie has generated offspring.

The more SLP required to produce new offspring, the higher the Breeding Count. Each Axie could only be bred six times in total. Axie, which has not yet been born, is referred to as a “Virgin” Axie.

When you have offspring, the genes of the caregiver Axies determine which body parts the offspring will have. Each body part has three genes:

The offspring will also pass down its Features on its parents’ classes. If each parent has a different class, there is a 50/50 chance.

Finally, Breeding Count increases in value due to the number of offspring that can still be produced and the SLP cost associated with creating the offspring. The genes increase the deal even though they ascertain the offspring’s chances of obtaining the best bits, determining its battle ability.

When an Axie’s class with its body parts is the same type, it is considered a ‘pure breed.’ When an Axie of a specific class uses a badge from that class, it gains a 10% attack and safeguards bonus. For instance, a Plant Axie who plays a plant card will earn 10% more attack/shield.

Pure breeds are now the only way to access the “secret classes” of Dawn, Dusk, and Mech. See the “secret college courses” section of my Class Guidance for further information.

We hope this information has helped you comprehend What Axie Infinity is, how it works, how to get begun, and how to make a profit.

Almost everyone has fantasized about earning money while playing video games as a child.

Crypto games and NFTs will transform gaming as we know it, owing to blockchain technology.

Keep in mind that Axie Infinity is still in beta.

Who knows what may happen in a few years when the game’s developers introduce new features?

What is Axie Infinity Stats, exactly?

Axie has four stat qualities in addition to their base class:

Axie has 140 stat points, split among the four attributes according to their base class.

How to Make Money from Axie Infinity?

With Axie Infinity, you can make money in two ways:

Is Axie Infinity a long-term investment?

For the following reasons, Axie Infinity’s unexpected popularity isn’t mere hype. To begin with, even though the game was released in 2021, the project’s crew has been working on it since 2017. Furthermore, the team has extensive experience in the gaming sector and is well-connected in the crypto world. A complete white paper with a defined roadmap is available from Axie Infinity. The fact that billionaire Mark Cuban is now a stakeholder adds to the project’s credibility.