How to start playing Farmers World? Read on to find the answer.

Farmers World has been available for less than a year. It has around 150,000 players around the world and more than 80,000 members on its Discord server.

The gameplay is passive, which may be appealing to investors who want to sit back and relax. However, getting started requires money, and it may take some time to recoup your investment. It is a game of strategy and timing rather than skill.

What is Farmers World Game? 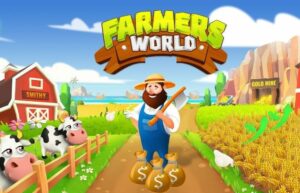 Farmers World is the first farm game available on the NFTs ecosystem. Choose appropriate tools for yourself, exploit various resources, purchase land to develop massive farms, and enjoy the exciting adventures of a farmer working in Farmers World’s Ecosystem.

It is a mining game with 3 in-game tokens: food, wood, and gold. Each has its unique function and can be traded within the game.

The majority of your time is spent utilizing NFT tools to obtain the three resources, purchasing NFT Land Plots to plant food, and raising NFT animals. You can also sell your gained NFTs for WAX on the secondary marketplace.

Farmers World does not have a storyline, but it was inspired by an ancient manuscript called “Manuscript No4848” preserved in the National Library of Brazil.

The paper describes a mystery society that is adjusting to living in the Amazon jungle. It describes a stone statue of a young guy with “no beard,” earthquakes, and other natural catastrophes – it’s a little complicated.

Farmers World takes place at the early stages of the strange, ancient civilization. As a player, you must construct your civilization by chopping down trees, collecting fish, farming, and mining gold. In reality, you’re doing these activities in the hopes of earning some actual money.

How to get Farmer Coins in Farmers World? Click on the link

How Does Farmers World Game Work? 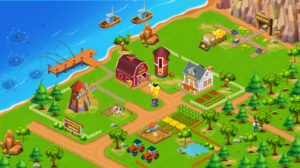 The farmer who lives in the Farmers World ecology is the game’s main character. To begin playing, users must have a tool. In Farmers World, players must select tools to explore resources; it is also possible to purchase land on which to develop farms. An axe and a fishing rod are required to begin the game.

Fighting-to-win games introduce play-to-win concepts. While waiting for the harvest, players can visit other farms and compete for resources with other players. Since gamers must also keep an eye out for intruders and protect their crops.

Farm simulators have long been a popular gaming genre, possibly due to their rigorous action and skinner box reward systems. Players plant and cultivate goods so that they have tangible reasons to return. Farmers World used several innovative marketing strategies to generate awareness before the game went live.

Rewards are classified into 4 types:

Go to farmersworld.io and click the green “Play & Earn” option. You’re taken to the game itself, where you log in using a digital wallet, either Wax Cloud Wallet or Anchor. 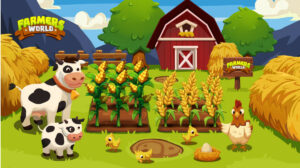 If you want to sell on the secondary marketplace, you’ll also require a WAX account, which you can get at wax.io. Gas fees are essential to fuel any blockchain transaction, which means they apply when you trade resources or mint NFTs in-game. You can begin playing right now if you’re logged in and have your accounts set up.

You’ll need tools to play. The tools you use to extract the in-game tokens. Create these tools yourself or purchase them from AtomicHub’s marketplace via drops or secondary transactions.

Furthermore, because you won’t be able to create tools when you first start off owing to a shortage of resources, you’ll have to buy stuff from the marketplace.

You begin with 200 Energy, which must be refilled to complete objectives. Use fishing gear to obtain food and refill Energy.

A durability index is assigned to each NFT tool. Gold is required to repair a tool with a durability of 0. The initial durability of tools ranges from 25 to 1,600.

After mining resources, each tool has a 60 minutes cooldown. You cannot use the items throughout this cooldown until the countdown ends.

Farmers World suggests starting with an Axe and a Fishing Rod. We agree, because chopping wood is a quick method to get started, and you can recharge your Energy using the Fishing Rod.

The tokens operate in a sort of cycle: require tools and energy to mine; require resources to restock and repair equipment to continue mining; mine the resources to earn and purchase better tools and gain more energy, and so on.

In September 2021, farming and cultivation were introduced to the game. To develop crops, you’ll need at least 1 Farm Plot, a Cowshed for cows, and a Coop for chickens.

The NFTs related to animal and crop production are as follows:

When growing crops, you must water the plants, which use energy.

When newborn animals reach the next level, their NFT cards are destroyed and minted, for instance: Calf > Baby Calf > Dairy Cow/Bull

A mobile version of the game is being developed for both iOS and Android platforms. Gamers may also be able to exchange resources in Farmers World with some other Farmers World players. We’re not entirely clear on what this involves, and a long-term update is planned.