A project of Enjin, the Enjin coin is an ERC 20 token that has revolutionized an interconnected gaming project based on the blockchain platform. In this article, we shall dive into the nitty-gritty of knowing what the Enjin coin is, how it works, the platform’s standout features, and a scoop regarding the creators of this innovative platform.

What is the Enjin Metaverse? 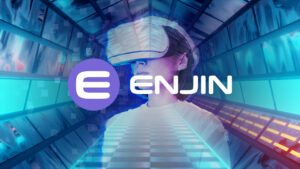 A holistic ecosystem created with products designed to usher distribution, creation, trade, storage, and even integration of digital assets is the multifaceted, innovative platform called Enjin. It is software on the Ethereum platform that gives ‌developers the ability to manage and create virtual goods while providing ‌gamers and creators with an innovative model of virtual ownership.

Enjin Coin is the first cryptocurrency created solely for online gamers and the gaming industry.

They have released software development kits (SDKs) that aid users in both creating digital assets and implementing them into games and apps on the Ethereum platform.

The Enjin adopters are using the platform in a creative way by constructing ENJ- backed digital assets, ranging from NFT arts to items used in various video games, to digital vouchers, and finally utilizing the platform as a tokenized commercial real estate.

How does Enjin Work?

We shall first know that its primary use is managing and storing virtual goods for games, which can range from in-game currencies to unique game items such as potions, swords or accessories for characters.

The following steps are inculcated to create and destroy in-game items:

The Enjin team has built SDKs that help to minimize the cost and difficulty in creating virtual goods and at the same time created Application programming interfaces (APIs) to help and place these items in the games.

Since the Enjin coin is an ERC20 token constructed on the Ethereum network, it provides smart contracts as well as seamless transactions. The Raiden Network was tested by Enjin for the first time, which is a Lightning Network. Later, it employed the use of a custom scaling solution known as Efinity.

The features of the Enjin Platform are as follows:

Management and Creation of Virtual Goods

The ability to manage and create virtual goods is one of the predominant features of the Enjin project. Developers have the freedom to launch their own crypto powered by the Enjin Coin; this makes the integration of cryptocurrency into the gaming world much more straightforward.

Godot, Java, Unity, and more are provided with software development kits by Enjin; this allows easy integration of creative projects by developers.

Users can discover, sell or buy rare and unique items from over 10 million digital items in Enjin’s online marketplace.

The Enjin Beam is a distribution system for digital assets which allows the developers to send a large quantity of FTs and NFTs to the users with a simple scan of QR code.

The Enjin wallet seamlessly links with various apps and games with over a million downloads; it is one of the world’s most versatile and feature-packed digital wallets.

Both ERC-1155 AND ERC-20 tokens can be transacted fast and free by this upcoming Ethereum product.

What is an Enjin Coin? 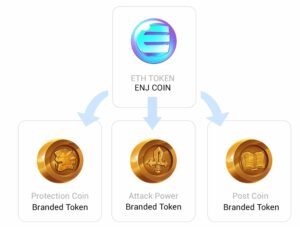 The Enjin Coin (ENJ) is an ERC-20 cryptocurrency based on the Ethereum Platform. Powered by the Enjin technology, the platform’s ecosystem is used for gaming, various apps, and NFTs. One can use the Enjin coin as a currency and use the wallet to sell, trade, and buy NFTs.

The special feature of the Enjin coin is that the marketplace holds assets that can be used, traded, and sold among multiple gaming platforms.

Enjin is a platform that lets people manage and create their NFTs.The Enjin platform is intermeshed with various gaming applications and allows the players to use their unique items across multiple games or sell their items in the marketplace. For example, if you created a unique game item in a particular game, in the traditional gaming model, one would lose the item once they stopped playing the game however, through Enjin one can own the item no matter what.

The following characteristics of the Enjin token, called ENJ, are stated below:

There are a billion blockchain assets that are powered by the Enjin coin, and here are the reasons why:

There is increased confidence in the assets and projects that are powered by Enjin Coins since the owners have the freedom to melt their NFTs back into Enjin Coins anytime they want.

The Enjin coin is an effective gold standard since the value of the NFTs is directly integrated with the ENJ backing which provides trust and reliability to the users.

The compatibility with the Enjin ecosystem and the proof of origin of the NFTs is due to the fact that the ENJ is stored within the NFTs, which guarantees seamless use within the platform.

Unlike other platforms or digital assets, the NFTs created within the Enjin ecosystem are backed by the ENJ, which confers them some value that can be destroyed whenever need be.

Due to the limited nature of the ENJ coins, backing NFTs and other valuable resources with it is the only way to control asset creation.

Scarcity increases when existing NFTs are melted; this, in turn, lowers the supply and increases the value.

The average block time on the Ethereum Network is 17 seconds. One of the first projects that were tested on the Raiden Network. Thereafter, they came up with a unique scaling solution known as ‌Efinity.

Off-chain alerts are used which provides a contemporary responsive experience. For every Transaction request, the platforms that are trusted send an instant notification to the smart wallet of the user. Thereafter, the user needs to accept the transaction notification which is created on the blockchain, where the wallet will establish contact with a Trusted Platform API to observe the transaction.

The website or game is then immediately updated with a non-tradable version of the asset or a placeholder item until they obtain full authorization for the item.

The user’s balance is updated in the game promptly in the event of an in-game currency. Unless a required number of blockchain confirmations are achieved, any unconfirmed section will be stopped from spending.

The Enjin coin SDK displays verified ‌balances that are not confirmed when displaying Enjin tokens and the custom assets for a transparent and simple implementation.

The Enjin token and the virtual assets are both ERC-20 tokens, which translates to the fact that the platform provides transactions and smart contracts. There is a seamless integration of the ERC20 with other smart contracts based on the Ethereum blockchain and other decentralized apps. Some tokens are called partly ERC20 when they include some but not all standard functions. However, they can still interact with various third parties easily.

The JSON-RPC protocol is utilized by the public Platform API offered by Enjin to provide ways of accessing each of the smart contracts and checking account balances. Without the requirement to install the web3 wallet extension on the web browser, the websites can display the data to the internet users.

Communities and games construct unique in-game products, currencies, and privilege tokens by using ENJ coins as the pivotal currency. Whoever owns such assets can melt them back into Enjin tokens at the exchange rate that was offered originally when they were produced.

The Enjin platform can be used to mint by the developers. Inflation is prevented in the market by creating scarcity; ENJ tokens are removed from the wallets and stored within the created assets.

The mint contract stores all the ENJ coins that are used to mint every unit of custom coins. Serving as the gateway for custom coins, the Enjin wallet aids in converting back the ENJ tokens included in the Mint contract. This provides the ability to allot assets with a known Enjin value and provides liquidity.

Bespoke assets ‌are developed using the ENJ to reduce the quantity of Enjin token circulation, which in turn boosts and conserves the long-term value of the Enjin ecosystem.

Based on smart contracts, the Escrow system enables a plethora of participants to safely transfer any number of game currencies and objects.

This can be employed for player-to-player basic exchanges, the smart wallets assists in-game and identifying relevant items, and accepts the deals with a simple click. An on-chain marketplace for digital items can also be utilized. Users can acquire, sell and find rare and unique items from over 10 million digital products made of blockchain assets.

All the features of the Enjin coin Incorporated across the CMS platform are supported by 250,000 gaming websites. It will also build, vBulletin, phpBB, Xenforo, and CMS interfaces as a subsidiary of the open-source platform API. This will allow even more online communities to integrate ‌the ENJ token into their websites and games. For bespoke websites and API, integrations, the use of open-source PHP AND NodeJS SDKs are employed, with the developers having simple access to all ENJ coin capabilities and features using them.

Enjin offers a handful of SDKs for Java, Unity, Android C#, and other platforms. They also provide a variety of software add-ons such as The Minecraft plugin, Unity plugin, etc. this aids all the developers to easily merge their current projects or create new ones.

A complicated decentralized payment gateway is possible to be built by such platform SDKs. New payment arrangements that can reduce the accounting workload while increasing trust and confidence between businesses and customers can be created.

Being one of the most feature-rich wallets globally with over 1 million downloads based on blockchain and can integrate with applications and games is the only Enjin wallet. It is possible to create subscription services, provide power-ups, rankings and unlock website content to subscribers. The user’s account will be linked to the user’s unique Ethereum address. 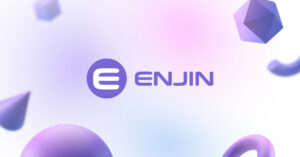 Enjin is placed right at the heart of the metaverse universe since it’s a platform that offers both gaming and NFT tokens. The Telegraph says that the ENJ coin will support gaming projects on all platforms with other areas with respect to the metaverse like Efinity’s core infrastructure and NFTs. This implies that the investors should be patient since it shall take some time for the ENJ to peak higher from hereafter in this post-pandemic economy.