What are Yield Guild Games assets? Yield Guild Games (YGG) is a unique guild project that specializes in NFTs and blockchain-based games. With YGG well-positioned to keep developing as asset management and facilitating play-to-earn through the scholarship model, YGG’s future growth will be contingent on the team investing further into existing projects along with new investments in up-and-coming play-to-earn gaming.

YGG is an intriguing investment opportunity for users who want to join in the play-to-earn category passively as investors. What are Yield Guild Games assets? Read about it in this post.

Yield Guild Games (YGG) is a DAO guild that engages with NFTS and the blockchain economy. Players from different backgrounds come here and battle to win virtual currencies. These games are a subset of what is known as the metaverse. The phrase metaverse refers to the various components of blockchain-based virtual worlds, such as digital property, digital products, and so on.

To know How does Yield Guild Games Work, read this article

What are Yield Guild Games Assets? 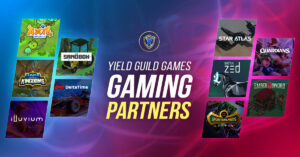 YGG started at US$ 8.49 at the beginning of September, less than 2 months after its public token auction, signifying a 349 percent increase in token price. YGG, on the other hand, was not spared from September’s customary softening, with the price falling as low as US$4.70 before a robust recovery in the last 6 days of the month.

The YGG coin was featured on Binance alongside new token entries from Huobi, Crypto.com, and KuCoin. On the 24th of September, the YGG token was listed on Binance and experienced substantial price movement ranging from US$5.97 to US$8.50 before completing the month at US$6.14 (US$686M Market Valuation).

Since the Binance placement, the token’s volume of trade has surged by 3–5x, with daily volumes consistently in the US$100M to US$150M mark.

The overall value of the treasury as of September was US$845,916,893, with the majority of the increase due to the development of the YGG token. This amount included liquid tokens, locked DeFi tokens, and NFT assets, in contrast to the very considerable YGG token holdings.

The following table summarizes the range and projected market value of YGG’s NFTs. YGG has added space approach Massive Multiplayer Online (MMO) game Influence to its expanding inventory of game partners and in-game materials for September. As of September 30, YGG’s total NFTs were 36,712 over 12 games, with a cumulative total worth of US$17.6M.

YGG is constantly looking for early-stage possibilities in games, systems, and protocols that show potential in building out a healthy ecosystem as part of its long-term goal for the play-to-earn system. The YGG team announced a SAFT with the Multiplayer Online Battle Arena (MOBA) video game Thetan Arena in September.

YGG has invested $335K in 8 games/platforms, with a current market value of more than $5 million. Since its debut, game partners like Illuvium, Star Atlas, and Splinterlands have seen positive results with a thriving community, NFT sales, and additional game developments.

What is Yield Guild Games Token?

YGG is the coin or token of the DAO platform Yield Guild Games. Yield Guild Games (YGG) is an ERC-20 unit that entitles holders to vote on the governance of the YGG DAO. It has a total quantity of one billion tokens, and 25 million YGG were sold in 2021 through an Initial DEX Offering (IDO) on SushiSwap. YGG has set aside 45 percent of the total supply to be handed to users gradually over 4 years to help the community.

How Does YGG Make Money?

On July 27, 2021, YGG held a public auction of 25 million YGG tokens (2.5 percent of total availability) on the SushiSwap platform, raising USD 12.5 million for its treasury. 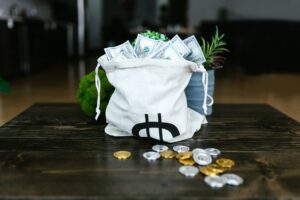 The round’s revenues will be used to purchase digital assets in video games and the virtual realm, including for user development and success.

Furthermore, YGG reinvests its revenue towards expanding its gaming asset base.

The company claims to have spent more than three times the overall money gained thus far in Axie Infinity to keep funding the scholarship ecosystem globally and is currently focused on expansion instead of profitability.

The fundamental business concept of YGG is to acquire income-generating NFT assets before lending them to players (also called scholars) who would not otherwise have access to them.

When scholars use YGG to access play-to-earn games and earn money, the revenues are distributed evenly between scholars and YGG.

YGG also uses Community Managers as intermediates, who are in charge of registering new players and giving instruction to help them improve their skills in a variety of games.