A little over a year has passed since Farmers World was first introduced to the public. It has gathered a global player base of over 150,000 and a Discord community of over 80,000.

Investors who like to take a back seat may find that the game’s passive nature is a significant selling point. However, you must invest some money up front, and it may take some time before you recoup your investment. It’s not a game of skill as it is a game of strategy and time. Are farmers world free to play? Let us read this in the following write-up.

What is Farmers World?

Food, Wood, and Gold are the three game tokens you’ll need to start this passive mining game. Each one has a specific purpose and can be traded with other players.

Most of your time is spent acquiring the three resources, purchasing NFT Land Plots to grow food, and raising NFT animals. Aside from that, you can turn your earned NFTs into WAX by reselling them.

According to CoinMarketCap, WAX is currently worth $0.3409 at this writing.

Farmers World doesn’t have a storyline, although a document inspired it in Brazil’s National Library called “Manuscript No4848.” We didn’t have to read this lore, but we decided to because it was interesting.

On the other hand, the paper describes an unexplained civilization that has adapted to the harsh conditions of the Amazon rainforest. For example, it references “doesn’t have a beard,” stone statues, earthquakes, and other tragedies; it’s a little confusing.

Farmer’s World takes place during the early stages of the unknown ancient civilization. To create your culture, you must chop wood, catch fish, farm, and my gold.

You’re trying to make money by doing these things in the real world. Here are the fundamentals for getting started in this game, which involves quite a bit of strategy.

How does Farmers World work? Click on the link to know.

Is Farmers World free to play? 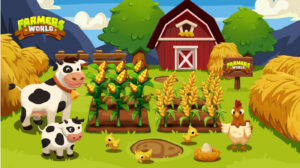 The game can be played for free but as of February 2022, you will need between $1,500 and $2,000 to get started in the Gold Mining aspect of the game if you wish to pursue that particular path. You did read that sentence correctly. You will require a Mining Excavator to mine Gold in-game. These can be purchased on the market on AtomicHub for approximately USD 1,600 (or 4,700 WAX), respectively.

Click “Play & Earn” on farmersworld.io to begin earning rewards. Upon entering the game, you are sent to a digital wallet to log in, such as Wax Cloud Wallet or Anchor.

You’ll need a WAX account when selling on the secondary market, which you may get at wax.io. In-game transactions such as exchanging resources or minting NFTs incur gas fees because the blockchain relies on them to function.

You only need to log in and have your accounts ready to begin playing.

Tools are required to play the game. To obtain in-game tokens, you’ll need tools. AtomicHub has a marketplace where you can buy these tools through drops or secondary transactions.

To get started in crafting, you won’t have the resources to make tools, so you’ll have to buy them from the Marketplace.

How does Farmers World make money?

It is a farm simulator and several real-life resource farming mechanics made into a video game. WAX, a blockchain specializing in games to generate Money, has made it their main game. Many users have become interested in this game after exceeding games like axie infinite in active players in just a few days. 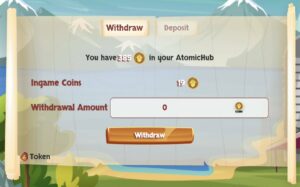 Farmers World isn’t complex, but it’s also not a game where you can get anything you want with a single click. Instead, there are a variety of tactics and methods you may employ to get the most out of the game. Tokens in the ecosystem are utilized and consumed in the game, encouraging you to use the tokens you earn and generating a more sustainable economy than single token games.

Is Farmer’s World Play to Earn?

Take a look at the various methods to earn game tokens that can subsequently be exchanged for real Money first. You can visit our other blogs which guide you on how to play farmers world. Understanding the game’s mechanics and operation can help you make sense of what you’re about to witness.

Farming or accumulating wood, gold, and food is the first and most common method. Using your tools and NFTs, you can obtain these materials in the game. You can take them out of your wallet and exchange them for WAX at Alcor Exchange when you’re ready. For example, you can do so if you want to sell your Wax for USDT, other cryptocurrencies, or your currency on platforms like Binance.

What you acquire in terms of resources depends entirely on the equipment you have and how aggressively you pursue the rewards. Because without membership cards, you’ll be forced to claim incentives daily, which is inefficient. We propose getting a membership card to optimize your earnings, even if you use it once every three or five hours. Although the initial fee may be more, consider how many resources you lose when you sleep, which you may regain with the membership card by accumulating several hours of help. You may also discover a guide to the membership cards’ functions on our website if you’re not sure what they perform. To maximize your revenue, we suggest that you thoroughly comprehend it.

Because NFTs are more expensive than wood and food, you’ll most likely receive those items first. Both of these resources may be sold on the secondary market, but you can also trade your resources for gold and utilize it in the game.

The second method of obtaining WAX is to sell the NFTs you manufacture in the game’s Marketplace. It is possible to craft new NFTs using resources like wood and gold. These NFTs can either be used to keep collecting or be removed and sold in the Marketplace.

However, keep in mind that selling the resources you used to build the NFT is likely to net you more money than the NFT’s market value. It’s simply figuring out which choice is the most lucrative. Also, keep in mind that the Marketplace may charge a commission and that it could take several days for the item to sell, especially if you don’t have a price that is in line with the competition.

Farmers World is a game that rewards perseverance. These things require time to cool down and recover their energy, and so does your character’s health. Because it’s a passive game, you’ll need to put some thought into your strategy to win.

Even though the gameplay isn’t all that fascinating, it can be worth trying for those who want to make Money without having to use their skills. Stay tuned with us for more articles like this one.