Axies are the protagonists of the video game Axie Infinity. They are used in battle in-game. In this article, you will learn how to Identify Axie Traits that can help you with the game.

This can happen in either Adventure Mode (PvE) or the Arena (PvP). They are a type of non-fungible token (NFT) that you own and keep in your wallet. You can collect them and use them to produce new Axies (offspring), a process is known as Breeding. They can be traded with other players or sold on a blockchain-based marketplace because they own them.

They are also your character in the Axie Infinity universe’s Lunacia during Land Gameplay. Players in this universe can own land, collect items, and earn resources. In turn, resources can be used to improve land and axes.

What are the various Axie Traits / Classes? 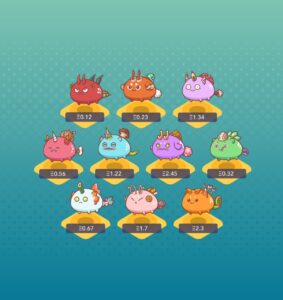 Axies are divided into six categories:

Each of these classes has a distinct ability trait for which they are most well-known. The morale of Beasts and Bugs is higher, which means they have a better chance of scoring critical hits in battle. Birds and aquatics have a faster attack speed, so they attack first. Plants and reptiles have higher health (HP), allowing them to take more damage. This isn’t to say they don’t have other characteristics; these are just the well-known ones (think fish are usually faster than, say, a turtle, which is why it has more speed).

An Axie’s ability is multiplied by the number of class traits they have.

Each Axie has six distinct parts or traits. From top to bottom, the eyes, ears, mouth, horn, back, and tail are listed in order. Only the bottom four traits are used in battle (mouth, horn, back, and tail). The mouth and ears will have future applications, but for now, they are purely aesthetic. Axie traits cannot currently be leveled up, but this will be one of the numerous neat stuff you do with your Axies in the future!

Axies are available in a wide variety of shapes and sizes.

Tanks are Axies with a higher HP and take more damage. Plant or reptile tanks are the most common because they have more excellent HP. Having a good tank that can heal itself (traits have this ability) gives you a significant advantage in battle. Shiitake, Blossom Bud, Zig Zag, and other parts found in tanks can either heal or damage your Axie. Or they have defense-boosting traits like Pumpkin, Hermit, Red Ear, and so on. Another excellent tool for this is Freak, which enables you to sort by Invasion, Defense, or Accuracy, seeing where each trait fits in.

DPS Axies are Axies with high Attack and Accuracy traits. This is beneficial because these traits have a better chance of reaching their maximum attack. DPS moves include Ronin, Hare, The Last One, Axie Kiss, and others. A good DPS is any trait with a high attack and accuracy. There is, however, a cost. Parts with high attacks tend to have lower accuracies, so finding a balanced attack is crucial. It’s also worth noting that these characteristics typically have low defense, making them vulnerable when attacked.

What Distinguishes an Axie from others? Where would an excellent way to begin be?

The first few breeds do not necessitate many perspectives (breeds 1,2 and 3). Due to the apparent time, it takes to gain the experience needed to breed. You will be able to produce more offspring at a faster rate as a result of this.

Furthermore, if you obtain an Axie with purity and breed it with another Axie with high purity, you will have a greater chance of producing purer offspring.

Axies have tags on them that indicate what season they were sold in. There are only three general tags: Origin, MEO, and MEO 2. Origins are the first Axies ever sold in the Axie Lab, and they’re the first class of Axies ever sold. Following that, the MEOs and afterward the MEO 2s are released.

What is the significance of a tag? The importance of a tag is that it cannot be passed down through the generations when bred. Origin, MEO, or MEO2 can only be found on the Axie with the tag, making it more valuable and rare. If you’re looking for a long-term investment, the Origin is the way to go because it’s one of the first Axies ever sold. A select few only carry these tags.

A mystic quality will be present. When the Origins were sold, there was a 1/3 chance of receiving a Mystic part. Because of this, mystic parts are scarce; there aren’t many of them. How can you tell if you have a mystic trait?

However, it was mentioned in the Axie Land Sale that mystic Axies would allow for the production of higher-level items. Lunacia’s mystic traits now have a higher level of utility.

Join the discord and ask away if you have any questions about the game! The Axie Infinity Community is eager to assist you in getting started, and there is even a scholarship program that could provide you with some free axies!

We hope this information has helped you comprehend What Axie Infinity is, how it works, how to get begun, and how to make a profit.

Almost everyone has fantasized about earning money while playing video games as a child. Crypto games and NFTs will transform gaming as we know it, owing to blockchain technology.

Keep in mind that Axie Infinity is still in beta.

Who knows what may happen in a few years when the game’s developers introduce new features?