Alien Worlds has announced the introduction of Alien Worlds Missions on the Binance Smart Chain. Explorers can now deploy their spaceships on missions throughout the metaverse. After successfully guiding their ships to their target and returning, they will be rewarded with Trillium and NFT cards.

The Alien Worlds franchise expansion will be welcomed by the game’s 3.6 million users who have already got their start at the game and are searching for new adventures. In this article, you will learn about Alien Worlds Binance collaboration.

What is Alien Worlds Binance Game?

Alien Worlds Binance game is an exploration and mining videogame in which users can own lands, use weapons and tools, design their avatars, possess rare items, and have minions to employ in battle. The game world has a full economy in which players compete for resources and worth. Binance Smart Chain now has special tasks where players may win TLM tokens. There will also be a competitive element called Thunderdome.

Trillium is earned by players in this game environment. This is a crypto token that connects the blockchains of Ethereum, Wax, and Binance, allowing the ecosystems of all 3 chains to combine into one. Mining rewards players with TLM, which they can then spend on better tools and weaponry. Landowners can also use airdrops to deliver their own unique NFTs to gamers.

Once you have accumulated a significant amount of TLM, you can stake it on a world and participate in planetary matters through their decentralized autonomous organization, or DAO. Gamers and planets are all vying for TLM, resulting in both competition and cooperation on various fronts.

The Alien Worlds Binance game offers an intriguing background that serves as the basis for the gameplay. The game is about fleeing Earth’s impending plague, as per the official website. The Federation, which includes the vast bulk of Bitcoin’s sophisticated people, received transmissions from an alien race, leading to the discovery.

The party came over a wormhole and collected Trillium along the way. Six planets were built on the Alliance of Alien Worlds as the game progressed, with people battling for resources.

Lands, creatures, and weaponry are all tokens in the game. The land is the most precious NFT in this game. When you own an NFT land, you may mine commodities and receive prizes. In the video game, land NFTs represent plots of land that may be harvested or auctioned out. You are given a commission when you lease out objects that you have mined.

In the digital world, pieces of equipment are tokenized as well. To mine commodities, you must first collect the necessary tools, which will make the procedure faster and easier. To mine digital products, you must first select a planet. Based on your selections, you must then choose a property tract to buy or rent from the landowner.

It’s also plausible to believe that newcomers start with spades and work their way up. Furthermore, gadgets require a particular amount of time to charge after each use.

On the Binance Smart Chain, Alien Worlds has announced new tasks! This statement has been a long time in the making for anybody who was present in the Summer of 2021 when the Alien Worlds’ Trillium (TLM) coin initially crossed to Binance Chain. Trillium owners can now gain more Trillium and special NFTs by participating in missions of varying lengths.

These tasks take place on the Binance Smart Chain, as the name suggests. Fortunately, the Alien Worlds website has been completely revamped. You may now simply access all Alien Worlds tools and link your WAX and Metamask wallets to keep records of your TLM across different blockchains.

These missions are essentially high-tech staking systems. They are open for a short time and anyone who meets the qualifications is welcome to participate. For the time being, the prerequisites are minimal. Trillium is required for each mission. You must stake a set quantity of Trillium for each vessel you deploy out on a mission.

This amount grows in proportion to the length of the operation. When the task is completed, or the lockup period expires, your Trilium is returned, along with anything you earned during the mission.

Some of this will be apparent to anyone associated with DeFi and token farms. The missions have no specified return rate. Each mission, on the other hand, has its own TLM reward pool. The reward fund is divided by the total number of vessels on the task and disbursed appropriately at the end of the operation. As long as you have sufficient TLM, you can stake as many vessels or shares in each pool as you want.

Alien Worlds also suggests keeping tabs out for future community-based tasks. There are currently a number of organizations that provide NFTs to those mining on their land. 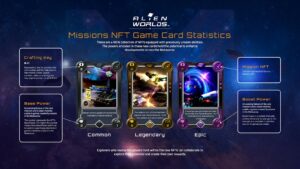 The various base mission types are:

Each Mission type has a chance of revealing a unique NFT. These 8 NFTs comprise a new collection with new abilities and applications.

In addition, three new abilities have been added: Base Power, Crafting Key, and Boost Power. At the moment, these NFTs have no effect, but they provide the foundation for future Missions that will grant benefits based on card ownership. Or to give NFTs with crafting keys a better probability of encountering other NFTs. Essentially, it serves as a foundation for both the Alien Worlds crew and the community to build upon in order to construct more complex challenges.

Overall, the Alien Worlds Binance update adds great gamification to what would otherwise be a quite bland experience. The income return rates fluctuate depending on the number of users, but it appears to be about 5-20 percent thus far within the first couple of days. Engaging in Missions necessitates keeping tabs on the missions page in order to avoid missing the launch periods. However, this is a significant step forward into a game that has been stagnant for a long time.