Alien Worlds is a virtual world blockchain videogame in which participants can earn money by playing games and generating NFT tokens. Play-to-earn games are gaining popularity because they allow users to be compensated for their efforts. On Alien Worlds, you can engage in a variety of activities such as questing, mining NFTs, and attacking other players. In this article, you will find the Alien Worlds guide for almost everything in the game. 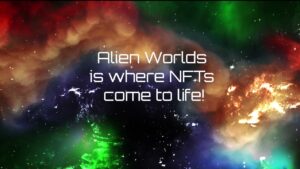 Alien Worlds is one of the most recent entries into the blockchain-based gaming space, and it uses components of both DeFi and NFT technology to present players with an innovative, decentralized game.

It bills itself as an ‘NFT DeFi virtual world that imitates economic competition and player partnership.’ People compete for and acquire TLM tokens during gameplay, allowing them to govern competing for Decentralised Autonomous Organizations (Planet DAOs) and unlock additional gameplay elements.

NFTs are digital in-game items that players can obtain and use to mine Trillium, engage in fights, and compete in missions. They can purchase and assemble NFTs that best fits their playing style, as well as participate in platform government by choosing the Councillors of six separate Planet DAOs, affecting the game’s direction.

TLM, like blockchain-based gaming rivals Binamon, Axie Infinity, and My DeFi Pet, may also be used to create passive revenue through staking.

How Does Alien Worlds Work?

Here is the Alien Worlds guide to how it works. The game offers an intriguing background that serves as the basis for the gameplay. The game is about fleeing Earth’s impending plague, as per the official website. The Federation, which includes the vast bulk of Bitcoin’s sophisticated people, received transmissions from an alien race, leading to the discovery. The party came over a wormhole and collected Trillium along the way. Six planets were built on the Alliance of Alien Worlds as the game progressed, with people battling for resources. 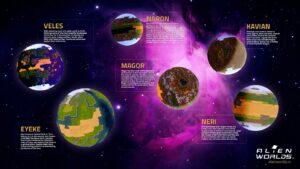 Lands, creatures, and weaponry are all tokens in the game. Land is the most precious NFT in this game. When you own an NFT land, you may mine commodities and receive prizes. In the video game, land NFTs represent plots of land that may be harvested or auctioned out. You are given a commission when you lease out objects that you have mined.

In the digital world, pieces of equipment are tokenized as well. To mine commodities, you must first collect the necessary tools, which will make the procedure faster and easier. To mine digital products, you must first select a planet. Based on your selections, you must then choose a property tract to buy or rent from the landowner. It’s also plausible to believe that newcomers start with spades and work their way up. Furthermore, gadgets require a particular amount of time to charge after each use.

How to Play Alien Worlds?

Here is the Alien Worlds guide to its gameplay. You’ll have to get a WAX account first of all. After you’ve created an Alien Worlds profile, you may begin playing the game. Following that, you select a name that will be shown while playing.

Following the creation of your account, the following step is to select a planet. You may select whatever world you like, and you can switch it at any moment because it is only a temporary location. When you choose your plant, the game transports you to the mining hub, where you will spend the next ten years. 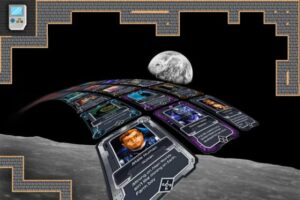 A mining hub is a location where mining operations take place. In the center, you could see your mining equipment and landing NFTs. Because newcomers are given spades, you should be able to find a free shovel NFT in your weaponry. Alien Worlds is primarily a mining game in which you must dig for rewards. To begin mining, head to the mining center and pick “mine.”

While mining for a while, you’ll receive some tokens and perhaps an NFT. It’s plausible to believe that lands vary, and as a result, some people appreciate digital content more than others. If you lease land to mine on, you should pay the landlord a part of your revenues.

Where to Buy Alien Worlds Coin?

Check out the two low-fee crypto exchanges provided below if you want to acquire Alien Worlds tokens fast, effortlessly, and reasonably.

While some cryptocurrency buyers and traders prefer to use decentralized exchanges (DEXs), we believe the following are the two greatest venues for buying and selling Alien Worlds coins:

Binance has expanded rapidly since its inception in 2017 and is currently one of, if not the, largest crypto exchanges in the world.

KuCoin is a worldwide cryptocurrency exchange that supports a wide range of digital commodities and altcoins. Since its inception in September 2017, KuCoin has evolved to become one of the most popular cryptocurrency exchanges, with over 5 million active monthly users from over 200 nations and regions. According to Alexa traffic rankings, KuCoin’s monthly unique visitors are in the top five in the world.

We’ve tried to cover every major feature of the Alien Worlds guide. We hope you find this page’s content useful. Alien Worlds is a well-known blockchain game that may be able to help you make money. However, the market is volatile, so act with caution while trading.

You may read about many metaverse games on our METAGREATS website. We will aid you in picking the finest crypto investment by conducting extensive market research.